Sometimes, I say the wrong thing..

Going through a life changing event like having a baby born with special needs changes you.  It makes you a little more cautious to tell people "don't worry, I'm sure it's nothing".

I talked with a friend who is having a baby. Their ultrasound showed a soft marker for perhaps a genetic condition.  As he was telling me, I couldn't help but think back to my own ultrasound and being told "don't worry, we know you have a marker for Down syndrome, but everything looks totally fine". I remember people telling us not to worry, everything was going to be fine, she was going to be perfect and healthy. I remember searching google for anything I could find on Echogenic Foci and being so reassured that it was so often nothing. I remember the paper the dr. gave me explaining what an EF was and how it talked about Down syndrome and how I ignored it because well, everyone said it was going to be ok.

I am thankful for those people who told me it was all going to be OK. I am thankful for my own blissfull ignorance to what it could be, I am thankful (well, almost) for the Dr. telling us that Ella didn't have Down syndrome. Why? Because for 98% of the pregnant population, it is going to be OK and there is no reason to spend a pregnancy worrying about the off chance that we are the 2%  The minute after our level 2 US was complete, I didn't worry about Down syndrome again until 8:30 AM on February 16th.

Today, when talking with my friend, I wasn't one of those "don't worry, it is nothing" people. I was exactly the opposite of what I was thankful for during my own pregnancy. I said what came to my mind. I told him that even if it is something, it doesn't matter, you will still love that baby like every other baby. I said that it is good that he has 2 other kids so he doesn't have the "new" parent jitters. I told him that I wouldn't change my life now for anything. I told him that everyone told me it was "nothing" and well, it was "something".

After I hung up I felt awful. This poor guy. Calls to tell me about work, mentions he has a baby on the way and had a not so "perfect" ultrasound and I can't just say something like "don't worry, it happens all the time, your baby will be fine".  I have to break out my own story, my own "don't worry" predictions. I probably sent him worrying for the next 2 hours and well, for most, it is going to be OK, there isn't anything to worry about. Our story isn't the norm, but when I talk to people, I forget that. I am so passionate about how yes, the initial shock was hard, but you will survive, you will grow stronger than you ever thought. I can't help but be the other side of the coin, not for the negativity, but for people to realize that the other side of the coin isn't such a bad thing.


I leave you with my version of the other side of the coin - a little blurry because she never stops moving... 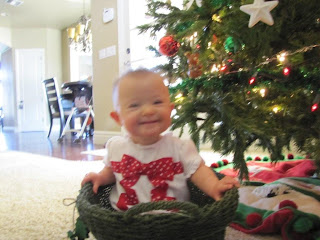