Daughtry to the rescue again...

Why did I cry? Someone asked my nanny if Ella had Down syndrome. To be fair, the person that asked has a 4 year old with Down syndrome and may have been tipped off by the preschool teacher that one of the kids in the class (Reed) has a baby sister with Down syndrome, but nonetheless, her asking made me cry. I know, I am most likely over-reacting as this woman is probably tuned in to what Down syndrome babies look like because she has been there and done that and she was probably so excited to meet Ella and share her knowledge with us, but for some reason it made me sad that she walked right up to Roxie and asked if Ella had Down syndrome.

I think I have done a good job adapting to our new life. I get that Ella has Down syndrome, I get that she may live with us or live only semi-independently for the rest of her life, I get that she won't be President and she probably won't drive a car. I think what made me cry was thinking that other people might know all this about her already by just looking at her. I don't want people to look at her and because she looks a little different discount her, her feelings, her abilities. I want them to give her the same chance they would give anyone else and well, the truth is, this might not always happen.  I don't think that the woman at preschool falls into this category at all and I don't think this is what she was doing, but hearing Roxie tell the story made me think about what we will be dealing with for the rest of our lives. People who automatically assume Ella isn't as "good" as them because she doesn't look like them.

Writing about it now, it seems so silly, I took one comment about Ella's day from Roxie and made it into something so much bigger, but hey, I can't help my feelings and I was already tired last night and so... I cried..  The best part... as I was crying my song (Daughtry's Life After You for those of you new to the blog) came on. Like someone out there was slapping me in the face as I was crying telling me to get over it and get on with cooking dinner.

Enough with that, she has Down syndrome, She is adorable and she rocks at sitting in her high chair and eating solids so.... 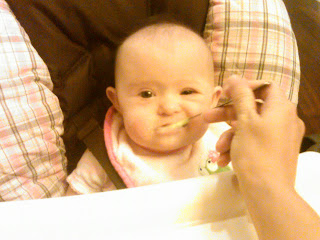 Let's move on... Yes, I said she rocks at eating solids. Tonight was the first night we tried it. We have been waiting as she is a wee bit behind in the sitting up thing and I didn't want to rush it until her head control was better, so we waited until now and well, she did wonderful!!! We gave her rice cereal and she ate the entire bowl. Let me tell you, this little girl had a blast. She would get so excited when the spoon was close to her mouth that she would shake.  I loved feeding her and I loved how into it the whole family was. Ryan was by her side the whole time encouraging her and wiping her face and Mike was taking pictures and Reed was talking about Cheetahs (4 out of 5 of us isn't bad...) and it just felt so awesome.  Everything she does is so much more important to me because I know she has to really work at it.  I was excited when the boys ate solids for the first time but it was more of a "oh, look how cute Ryan is when he has rice cereal all over him, and me and the floor". With Ella you are excited because you know it is hard for her little muscles and her tongue to all work together but she keeps trying and by the end, I swear she was a pro. I was a proud momma tonight.
We are working really hard on getting her to laugh and sit up and use her arms more.  She can laugh, I know she can, but she just chooses to show us her giggles with big smiles instead. The sitting up thing... Well, Ms. Ella needs some more strength in those ab muscles. She is a bit wobbly but we are working on it.  I know I talk about her therapists all the time, but honestly, Tess has been the biggest blessing to us. She knows how to work with Ella to really make her "work out" without angering her and she is positive but realistic. 3 months ago I really didn't get why you start therapies so early, but now, I get it.
OK, off to bed. Mike and I realized that we won't ever be skinny again by just sitting on the couch so we are waking up early to work out. I wish I could do the boot camp thing but there isn't time in the morning with Ella's therapies starting so early (we had to move them even earlier in the morning to make sure we could get Mr. Cheetah and Ryan to school on time) so I will be in front of my TV tomorrow at 5:00 AM watching Denise Austin tell me my buns are great but she can make them fabulous. Good night!
Posted by Lizzy at 9:03 PM